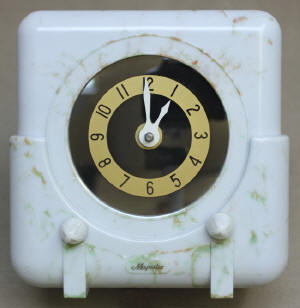 The Majestic 5T and 5TO have to be one of the most unusual clock radio's made. They are small, cube shaped and when the radio is in the off state, it appears to be just a clock with a mirror background. Turn on the radio and the two-way mirror reveals the back-lit radio dial. Mirrors are hard to photograph, so the silvered mirror appears to be black in the photo but in real life it looks like any other mirror until the radio is turned on.

Unlike the modern and G E's first clock radio, the Majestic clock has no alarm or radio turn on feature. It's just a clock and it has to be hand started by spinning the small metal knob at the center. The speaker faces out on the backside of the molded radio's back.