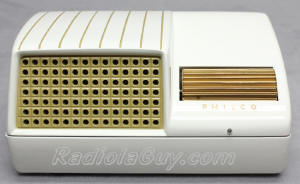 This piece is like new, a rare find in this condition. Referred to as the "Secretary", all functions of this unique radio are operated with one control.  Circuitry features a standard 5 tube (all American five) super-het with 6 pre-sets for tuning.

Here's how it works; The large splined cylinder serves as the on/off switch, volume control and tuning control. The cylinder rotates for on/off, volume and is pushed downward to change stations. There are 6 pre-sets that are easily set from the radio's underside. Each station has both inductive and capacitive tuning for maximum sensitivity and selectivity. With each station selected the color of the jewel just below the cylinder (control) changes > (see below).

From my long time collection, now offered for sale, this piece was acquired from another collector years ago.

I have replaced the old capacitors (a must on any old radio or electronic piece). Tuned it up and all works well.

Since childhood Philco has always been  my favorite brand of radio.  From around the age of 12, I can't remember a time when I did not own a Philco radio or have one at my bedside.

Philco was founded in the late 1800's as the Philadelphia Storage Battery Company. They made batteries for the early electric cars. In the 1920s, their production switched to making batteries & home charging equipment for battery radios.

As the electric radios were fast fast becoming the new, popular technology, Philco built their first all electric radio (called light socket powered then) in 1928.

With great promotional venues and a quality product at much lower prices than their competition, Philco became the industry leader in radio manufacturing by 1930! In 1939, they built their first television. For the budget minded, the Philco line of radios where among the best in quality and performance in my (and many other's) opinion .

The Philco line of radios, TVs and other home appliances came to an end in the early 1960s when the company was bought out by the Ford Motor Co. A sad ending for a great American company.

Some of Philco Firsts: