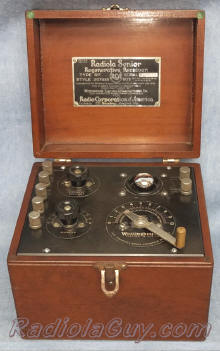 The Aeriola Senior is the same as the  Radiola Sr. Difference being its the early version. A single tube regenerative receiver was introduced in Dec. 1921 as the Aeriola Sr. by Westinghouse. It sold for $65.00 including the "WD-11" vacuum tube. The early version had a painted wood panel with silver plated dials, the case was made of Poplar. A later version (early 1923, still an Aeriola model) had a molded Bakelite panel and a Mahogany case. It was another later version was dubbed the "Radiola Senior" & given a metal nameplate to replace the paper "lid label".

Other than the Bakelite panel, the only other difference between the early & late versions is the depth of the "tube well". The "well" is shallower on the later model and the lid will not close if you install the earlier (large bulb, brass base tipped) version of the WD11 tube. Likewise, if you install the later (smaller) version of the WD11 in the early model, you will have a real challenge getting it out.

I equipped this radio with a V99 with a base that's been tooled to fit the WD11 socket. The V99 or UX/UV 199 is a much better tube than the WD11 and easier to find at less expense.

One tube radio receivers are capable of headphone listening only, an amplifier such as the Radiola AC or other 2- stage audio amplifier is required for loud speaker listening.

* the UX or UV 199 tube is an excellent substitute for the WD11 but requires a 3 volts the filament supply. They are less expensive than the (poor quality, easily damaged WD11), easier to find and perform much better than the WD11.

The case is very good with original finish suffering only minor scuffs and scratches. The latch and hinges has some light surface rust. Insides very clean, the grid leak it open with has very small replacement resistor/capacitor tucked underneath the rather large original part.

I HAVE ALSO THE AERIOLA VERSION FOR SALE.