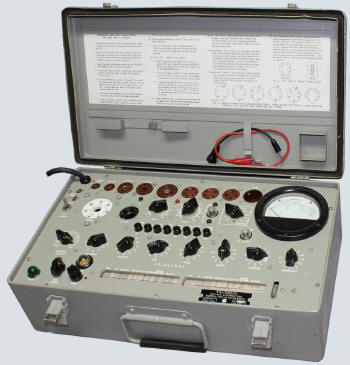 The TV-10 is the big brother of the very popular TV-7 with several important differences. The most significant; the TV-10 reads in direct Micromhos, the TV-7 reads some sort of percentage scale which with a formula can be translated to Micromhos. Another big difference are several additional tubes sockets for testing some of the smaller transmitting tubes. Another feature (you don't find on most tube testers) is the ability to test early Western-Electric tubes such as; 101, 102, 205D, 300 & 350B which are just a few examples of those listed on the roll chart. All the Sparton tubes are also listed.