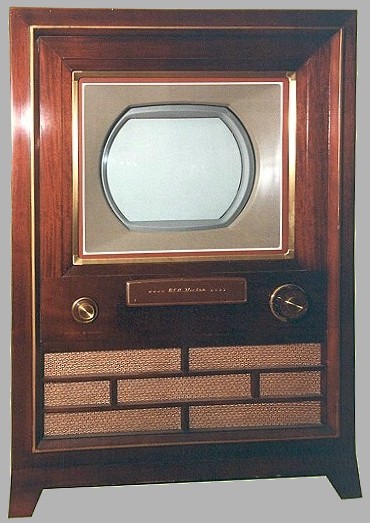 RCA was first to market a color TV  when it offered the now famous model CT-100 in 1954. It was promoted as having a 15" screen but in reality it had only a 12" viewing area. The CT-100 cost RCA nearly $1500.00  to build but they sold 'em for only $995.00.  The loss was only "pocket change" compared to the subsequent steadily increasing sales of color TV's over the following decades. Although all manufactures built a color TV in the 1954 - 55 period, few of were them sold and they suffered from poor performance and were prone to a multitude of electronic problems. The CT-100 performed extremely well with beautiful color and picture resolution.

Over the years I have restored and owned a number of these wonderful sets and a couple of photo's is all that remains of them with me today. The above image was cropped from a photo taken in my living room in the mid 1960's. It was the first of these that I owned and restored.

The CT-100 truly was a wonderful example of NTSC at it's very best. The color resolution was unmatched until high end monitors were introduced in the late 1980's. Unknown by most, the color bandwidth of broadcast television was triple of what all consumer television sets could reproduce until the late '80's, that is all but the CT-100, it reproduced the full spectrum of the IQ method of color demodulation. All subsequent TV's (until the late 80's) incorporated the R-Y, B-Y color demodulation (about 1/3 the bandwidth of what was broadcast). The shortcomings of the CT-100 was low brightness and the small screen

Below is an off the air image of that same TV that I restored & photographed in 1966. I used the TV in my living room until I moved in 1970. The image was of a morning talk show being broadcast from a Washington, DC station. If anyone knows who the lady in the image might be, please notify me.

Unfortunately, I did not have the forethought to take any additional photo's of any of this one or any of the other CT-100's I restored over the years.