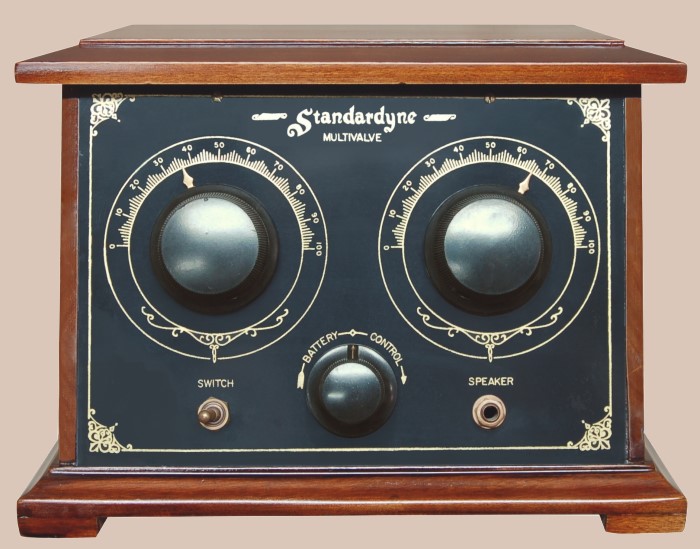 When found, this piece was was meticulously cared for or if it was refinished, it was done professionally. The paper rear instruction label was badly damaged, so I created a reproduction.

The Multivalve is a one tube receiver using one of the earliest (and quite rare) multi section vacuum tubes.  The circuit is a three tube reflex, whereas the audio signal is fed back (reflexed) through the RF section for more audio amplification. So in theory, this one tube set performs like a radio with 4 tubes giving it enough audio amplification to drive a loud speaker. It's performance is typical of most two tube receivers with heads. Deference being, it does drive a load-speaker with ample volume.

The Multivalve is the equivalent of three 201A's in one envelope that's no bigger than the standard UX-201A tube (that was the industry standard of the mid 1920's) except for the base ring that had 4 additional terminals. The extra terminal were for the 2 additional grids and plates of the three section tube. The tube had three separate filaments (all in parallel) that was wired as a conventional 201A. Since filament type vacuum tubes had no cathode (the filament was coated with electron emitting material), one side of the filament served as the cathode.