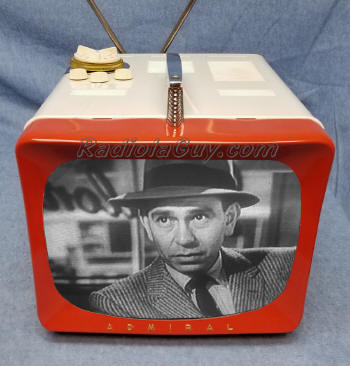 My first job was working as a technician in 1959 at a small store in my home town of Ashland, KY. The store's name; Jack's Auto Store, they sold automotive accessories such as seat covers, car radios & other automotive accessories which often included installation of these items.  However their majority of their sales were Radios, TVs & home appliances (Washers, Dryers, Refrigerators and other small appliances plus bicycles and large children's pedal toy rides (tricycles etc.).

The above TV was a common type by most manufacturers of low priced so called portable TVs of that period. I remember well the difficulty servicing such sets. Just removing the chassis from its cabinet was a job requiring some choice language and a pry-bar.

I've had this cute little TV on display in my radio room for years in as-found condition (reminiscent of those early years while learning TV servicing) . It was so clean when found I just put it on display and just finished its restoration. Several things prompted me to purchase it, the immaculate condition, my past memories of my experience back in its day of serving this very model. That memory was not always a fond one because of the difficulty in servicing I previously mentioned.

Admiral TVs & radios were among several of the brands sold at "Jacks" and the optional Scottish design dust/travel cover, was not something I remember. I may have been an optional accessory or just and aftermarket item purchased elsewhere.

Radiolaguy's collection, the television is not for sale.