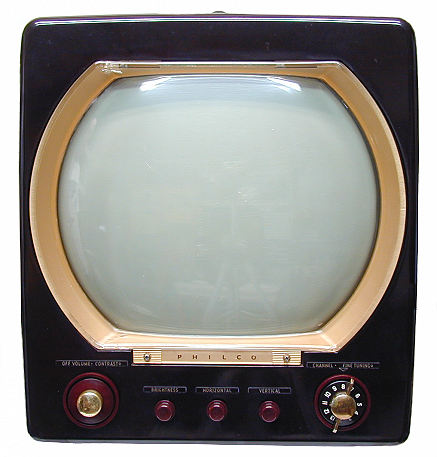 This little Philco TV with a 12" round CRT looks pretty much like just another TV but read on, this is quite a rare set. As a kid living in Ashland, KY, I owned one just like it.

I found it as a used or "junk" set. I made it work and had it in my bedroom/shop for several years. Later on when I was much older and started collecting radios and a few vintage TV's I remembered this unique little set and started seeking one for my collection. For many years I advertised for this set and conversed with other collectors and dealers of vintage TV's and not one of them was familiar with this unique TV.

Several years ago while back home visiting and almost forgetting about my quest for this TV, I stumbled across an old TV shop in Ironton, Ohio (just across the river from Ashland). I made it in to the shop and struck up a conversation with a very pleasant elderly gentleman. He turned out to be the proprietor Earl Hannon (whom has since passed away). After an interesting conversation about the radio and TV business (in which both we shared a common background). I informed him of my interest in acquiring and restoring the old marvels. After a while he allowed me to look around in the back of the building. I made my way through the "clutter" (in some places it was piled up over my head) and discovered a TV collectors dream. The back storeroom of the old shop was piled full of old radios and TV's. Many of the TV's dated back to the late 40's and didn't appear that they had been touched in the last 40 years. I spent part of two days moving stuff around and uncovering a number of nice, early small screen TVs of the late 40s. Among the sets I purchased from Mr. Hannon was the set I am about to describe. For all I know it may be the actual set I had as a kid in the 50s.

The unique feature of this set is the special picture tube, which Philco dubbed the "Neoscope" the designated CRT number "12WP4". As far as I know this Philco model series is the only TV that used this tube. What makes it special? The neck size! It is the only TV utilizing a small neck CRT until the late 60s or early 70s and this TV was introduced in 1950 (a 1951 model). The neck is 3/4" in diameter and has a 9 pin base just like the 9 pin miniature receiving tubes. The yoke as also was also specially designed for this "used one time CRT". Other features: lightweight; series filaments; Selenium rectifiers and very compact, in fact it is smaller than Philco's 7" set produced a couple of years earlier.

For all I know and since I found this TV near where I used to live, it could be the actual set that I owned many  years ago.